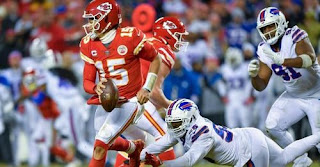 Here’s a novel solution to the NFL’s overtime rules conundrum:  Forget the coin toss and just keep playing!
It’s actually a very elegant solution.  If the score is tied at the end of regulation, whoever has the ball just keeps it, and the game continues until one team scores by touchdown, field goal, or safety.
The problem with the current NFL rules is that it places far too much importance on the coin toss.  The winner of the toss gets to receive a kickoff – regardless of the status of the game when time expired.  And the receiver of the overtime kickoff is the winner in an overwhelming number of games.
What about the argument that the defense is just as important as the offense?  Well, nobody told that to the rule-makers.  The rules of football overwhelmingly favor the offense (ostensibly for both player safety and for fan satisfaction).  The poor defense in overtime has very little chance of holding their own and preventing a score from an offense who is already pumped for victory and has the rules stacked in their favor.
So, I propose: just keep playing.
Here are a few details:
The game would be played in as many 15-minute quarters as necessary to declare a winner.   But the clock would never stop.  Since it’s irrelevant, it would simply keep running, primarily for statistics-keeping purposes.
The play clock, however, would be enforced.  Teams could not call a time-out; they would have to abide by the play clock.  Officials could call time-outs for injuries or other official business.
No challenges from the bench; all challenges would be called from the booth.  (That’s actually one overtime rule the NFL got right.)
And here’s a game changer:  No punts in overtime!  A team would get four downs to advance the ball ten yards or score.  If they fail, the other team takes over on downs.  (Just think of how much that would advance the tempo of the overtime!)  In the case of a failed field goal, the other team takes over on the former line of scrimmage.
If regulation ends with a score which ties the game, overtime begins with the scoring team kicking off.  Then the game continues with the above rules.
In the case of the divisional playoff game on January 23, 2022 between the Bills and the Chiefs, since regulation ended with a Chiefs field goal tying the score, overtime would have begun with the Chiefs kicking off to the Bills.  And the game may have turned out differently.  But at least every person on each team and every fan in the stands and every person watching on television would know what was about to happen.  And nobody could blame the Chief’s win or the Bill’s loss on a coin toss!
The following could have happened:  Chiefs kick off, Bills start on, say, their own 25.  But after four downs, if they haven’t advanced ten yards – and without a punt available to them – the Chiefs could have taken over deep in Bill’s territory and won on a field goal.
There’s no way of knowing how it would have turned out.  But one thing is for sure:  There is no reason to have a coin toss at the beginning of overtime and start the game over completely from scratch.  Simply start the game from the position that existed at the end of regulation and just keep playing.
It’s that simple.
Posted by Joe DeShon at 1/24/2022 07:25:00 PM No comments: